The Re-Emergence of Foreign Banks in Shanghai: An Ecological Analysis Defended on Thursday, 13 October 2005

Is China, with one of the world’s fastest growing economies, indeed the market of high returns and quick profits as the popular press and communis opinio seem to suggest? This book offers a more moderated perspective. It shows, by employing theories and methods from the field of organizational ecology, that the intricacies of the local market might frequently have been underestimated. Based on a detailed analysis of the re-emerging population of foreign banks in Shanghai, it points out that as more and more foreign banks set up operations in Shanghai, competition among them is intensifying to the extent that it is deterring the founding of new foreign banks in Shanghai. Foreign banks furthermore face long waiting times before they can start providing banking services and, in addition, their profitability is affected by the growing number of domestic banks. From a theoretical perspective, the findings in this book add significantly to the study of re-emerging organizational forms, the study of ecological dynamics prior to entry into a population, and theories concerning inter-population competition such as resource partitioning. 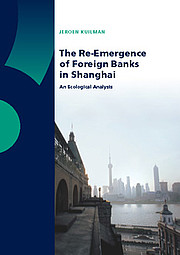