This thesis consists of five empirical studies related to exchange rates. The first two studies deal with the fundamental theory of Purchasing Power Parity (PPP), which postulates that goods in different countries should have the same price when expressed in the same currency. The main conclusion of these studies is that the common use of a methodology with the restriction of homogeneous mean reversion in a panel of real exchange rates can have a dramatic impact on inferences made on the validity of the PPP hypothesis. The third and fourth study focus on the Uncovered Interest rate Parity (UIP), which is another fundamental economic theory. UIP states that the expected change in the spot exchange rate is equal to the forward premium. The linear models used in the third study are unable to capture the dynamics better than the benchmark random walk model. For the nonlinear models in the fourth study, however, UIP can not be rejected. The last study concerns the measurement of the volatility of exchange rates. The parsimonious multivariate Stochastic Volatility model is discussed that is estimated efficiently by using the distributional properties of the range-based volatility measure, which makes use of high and low prices. The estimated currency-specific volatilities that are extracted from the exchange rate volatilities are able to pick up some of the most saliant events in exchange rates. The five studies presented in this thesis offer a number of extended and enhanced empirical models that shed new light on the dynamics and determinants of exchange rates. 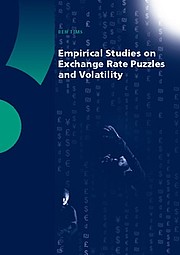