Organizing for Ambidexterity: Studies on the pursuit of exploration and exploitation through differentiation, integration, contextual and individual attributes Defended on Thursday, 4 March 2010

In the current volatile business world, being able to handle both future market shifts (explore) as well as current market dynamics (exploit) is of critical importance. Research has pointed out the role of developing and integrating exploration and exploitation activities, or ambidexterity, to achieve such capabilities and associated superior performance. Becoming ambidextrous is, however, a challenge as exploration and exploitation appear juxtaposed in ways of organizing, mindset, and intent. Nevertheless, scholars have indicated several ways to overcome these tensions and achieve ambidexterity. However, many contingencies and factors influencing this process remain uninvestigated.

The studies in this dissertation contribute to our understanding of such critical factors that foster appropriate allocation of resources and ambidexterity. One central perspective in these studies is that, instead of viewing exploration and exploitation as contradictive, they should be viewed as a paradox from which, despite their differences, synergies may emerge. Such a perspective shapes the ability of organizations and individuals to realize ambidexterity.

An overarching insight from these studies is the notion that depending on several contingencies, such as hierarchical level and individual attributes, different integration mechanisms should be employed. Furthermore, some integration mechanisms work out differently depending on the context within which they are embedded. These findings suggest that there is no single best method of achieving ambidexterity. This underlines the strategic importance of organizing for ambidexterity as a key driver for current and future firm performance. 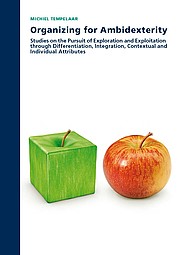