Intelligent Adaptation: Organizational Dynamics of Cognition and Action in the Changing Dutch and U.S. Banking Industries Defended on Thursday, 18 September 2003

Inflection Points are characterized by their severity, their sudden occurrence and by their origins outside the firm which usually makes it impossible to predict them. They are life-threatening and call for a dramatic change in the strategy and structure of the corporation. The deregulation of air transport was such an event. The rapid expansion of the telecommunications industry with the simultaneous introduction of new wide-band technologies was another. The same can be said for the enlargement of the European Union and the addition of a number of low wage-cost countries for many manufacturing companies. One of the first to use the word "Inflection Point" was Andrew Grove, the legendary head of Intel, a company that went through at least two of these events  one when the memory chip business migrated from the US to Japan and Korea and they dramatically shifted their business to microprocessors, the other when the focus of their marketing moved from industrial customers to consumers. This book focuses two aspects that up to now have not been analyzed to any extent. The first is the leadership viewpoint  it looks at the transition entirely from the perspective of the CEO and his executive board, and considers what he can, and cannot, do. The second is the lateral perspective  it does not consider an inflection point as a single event, but rather a process that unfolds over a number of years. This book provides an analysis of what the leadership of a firm can do in each of the development phases of an inflection point. It also tests these ideas against an outside case example, the transition of the publishing industry into the Internet era.

Managing Initiatives: A Synthesis of the Conditioning and Knowledge-Creating View

Leadership and the inflection point; A Longitudinal Perspective

Making Sense of Formalization in Interorganizational Relationships: Beyond Coordination and Control 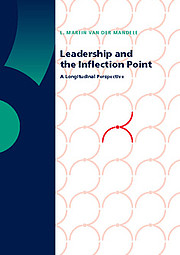