Corporate governance in transition economies does not fit in the dominant normative models. China embodies institutional tensions between an inherited system of political governance and new laws transplanted from Western countries that empower external shareholders on capital markets.

The two empirical studies in this dissertation apply set theoretic methods on large samples of Chinese listed firms to uncover the causal complexity involved in corporate governance problems, focusing on the complementarities, functional equivalence and causal asymmetry. The first study analyses the configurations that facilitate and deter the most salient governance problem: the diversion of cash flow from the firm by controlling shareholders through tunneling. The second study analyses the diversity of governance forms in successful firms, including politically embedded firms, those that rely on outsider control systems resembling the Anglo-American model, as well as creative hybrid forms.

The dissertation shows that, even in transition economies, property rights matter for allocating decision making rights between large and minority shareholders. Also, political connections matter, but not as much as is commonly assumed since many private firms operate profitably without any political ties. Finally, the thesis commands caution regarding the role of independent directors, who not only fail to provide effective monitoring on insiders, but often facilitate collusion easing tunneling behavior. 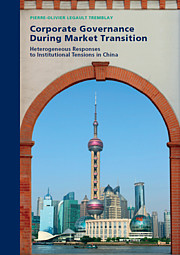