All Apologies: On the willingness of perpetrators to apologize Defended on Friday, 10 January 2014

An apology is one of the most common ways for a perpetrator to initiate the reconciliation process. Numerous studies have shown the positive effects of apologies. Contrary to this, almost no research has investigated when perpetrators are actually willing to offer such an apology. In this dissertation the willingness of perpetrators to apologize to a victim after an interpersonal transgression is investigated. 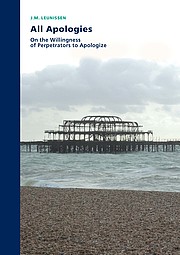