This thesis studies various computational and game-theoretic approaches to economic modeling. Unlike traditional approaches to economic modeling, the approaches studied in this thesis do not rely on the assumption that economic agents behave in a fully rational way. Instead, economic agents are assumed to be boundedly rational. Abandoning the assumption of full rationality has a number of consequences for the way in which economic reality is being modeled. Traditionally, economic models are mostly of a static nature and have a strong focus on deriving equilibria. Also, models are usually analyzed mathematically. In models of boundedly rational behavior, dynamic elements play a much more prominent role and there is less emphasis on equilibrium behavior. Also, to analyze models of boundedly rational behavior, researchers not only use mathematical techniques but they also rely heavily on computer simulations.

This thesis presents four studies into the modeling of boundedly rational behavior of economic agents. Two studies are concerned with investigating the emergence of cooperation among boundedly rational agents. One study focuses on cooperation among firms in a Cournot oligopoly market, while the other study examines cooperation in a spatial model of price-competing firms. The other two studies in this thesis are concerned with methodological issues in the use of evolutionary algorithms for economic modeling purposes. One study shows how evolutionary algorithms can be analyzed mathematically rather than using computer simulations. The other study criticizes the use of a so-called binary encoding in evolutionary algorithms. 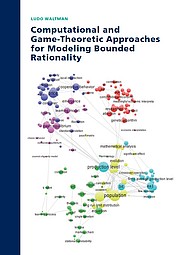 Uzay Kaymak
Professor of Intelligence and Computation in Economics