Liner ships sail according to a published timetable specifying the arrival and departure times in ports. Liner shipping networks consist of cyclic routes that are usually serviced once a week. In this way, customers know when they can pick up or deliver their containers to a port. Each route in the network is sailed using one or more ships with possibly different capacities. The network is used to satisfy the given container demand between ports. Liner companies obtain a revenue for each container that they transport between two ports. Furthermore, they incur costs for operating the network: fixed ship costs, bunker costs, (un)loading and transshipment costs and lost sales costs. The first part of this thesis proposes methods to design liner networks that maximize profit for the liner companies.

Ships will incur delays when executing a route, resulting in uncertain arrival and departure times. Delayed arrivals can be very costly for liner companies, hence they want their schedules to be reliable. The reliability of a route can be increased by including buffer time in the route, which can be used to capture a delay without incurring delay costs. Furthermore, ships can reduce delays by speeding up, which brings about additional costs. The second part of this thesis proposes methods to minimize total costs by reallocating buffer times and determining recovery policies specifying how to react on incurred delays. 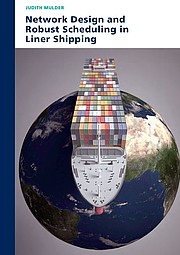