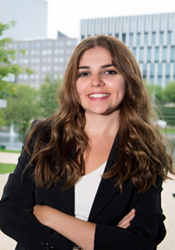 Gizem Yalcin is a third-year doctoral candidate in Marketing at the Rotterdam School of Management.

Her specialization is consumer behavior, and she is very much interested in the concept of technology and how it affects the way consumers behave. As a side research interest, she also studies moral behavior.

She has received many grants during her graduate studies, including the ERIM Achievement Grant (2015) and a grant from the European Institute of Advanced Studies in Management (2016). She also received several awards during her studies including the Bruins Prize (2017), which is intended for research students who excel in terms of their academic performance and the Beattie Award (2019) which is given to advanced graduate students who study judgment and decision making.

PhD Track Man versus Machine: Unraveling the Dynamics Between Humans and Machines in Consumer Behavior

The adoption of robotics in everyday life has increased rapidly thanks to recent advancements in technology. With the accelerated demand for automated processes, robots, AIs, and algorithms have been given improved skills, including skills associated with human beings. The invasion of technology in all aspects of modern life raises important questions about relationships between humans and non-humans. Gizem’s research focuses on the human-machine dynamics in consumer behavior. She aims to provide a comprehensive understanding of these dynamics involved in the transfer and valuation of information between humans and nonhumans, as well as a counter perspective on the pervasive technology-is-always-good or bad rhetoric in contemporary business literature.