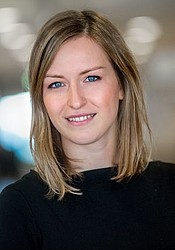 Linda Couwenberg is a PhD candidate in Marketing Management at Rotterdam School of Management. Linda is also part of the Decision Neuroscience Lab at the Donders Institute for Brain, Cognition and Behavior, and combines behavioral experiments with neuroimaging methods. Her core research interests are in the areas of decision making and motivation. Within these broad domains, she has several streams of research. In her research on decision making, she focuses on the drivers of diversification and satiation. In her research on motivation, she examines the dynamics of goal progress and its influence on motivation to obtain a reward. Linda holds a MSc (Research) in Psychology (cum laude).

PhD Track From valuation to action: The neural underpinnings of motivation

People often want to change their behavior, and advertisers and public policy-makers frequently employ communication strategies to achieve behavioral change on the part of their target audience. However, following up on plans and instigating new behavior is difficult as it requires additional effort, and humans tend to favor the least effortful action. Here we study how neuroimaging methods may increase the power and accuracy of predicting the effectiveness of motivating behavior. We describe three studies on the neural underpinnings of motivation, or the willingness to expend effort. More specifically, we will use functional Magnetic Resonance Imaging (fMRI) to predict, and understand why, which elements of advertising strategies are successful in stimulating behavior, and maintaining consumer motivation. In the first study, we aim to predict the success of different television commercials in eliciting a behavioral response, by the neural activity evoked by these commercials. Particularly, we investigate whether the brain can systematically discriminate between the effectiveness of different advertising executional elements. In the second study, we investigate the neural drivers of goal-directed motivation over time, as a function of (perceived) goal proximity. In the third study, we combine and extend the first and the second study in order to explore whether brain activity in response to goal progress information in persuasive messages predicts subsequent behavior.