“Family firms have one important key asset for surviving and prospering,” according to Dr Carlo Salvato of Università Bocconi: “their next generation of young family members.” Yet how the next generation is trained for leadership has not been the thoroughly studied, according to Dr Salvato and his colleagues Guido Corbetta and Alberto Falck. Admittedly, leadership training is a well-explored topic in organisational behaviour. However, family businesses have particularities that make them substantially different from other companies. 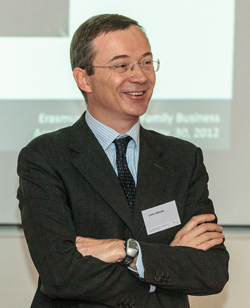 The team of researchers initially thought that the next leaders are trained by either family members or managers inside the company. However, case studies told a different story. “To our surprise, we realised that external, professional advisors, who were neither family members nor managers in the company, play a significant role in training the next generation leaders.”

Even more surprisingly, advisors in family businesses hadn’t received any formal training in executive coaching, despite the existence of such an industry. Dr Salvato: “Very often, [the advisors] were introduced into the family firm or family as friends and business advisors.”  Typically, a senior generation leader would ask such an advisor to oversee the growth of young family. Indeed, in the case of family firms, trust is more important than experience and expertise, explained Dr Salvato.

The relationship between the advisor, the family, and its young members isn’t a straightforward exercise of transmitting skills. Rather, there are entangled issues. “Some of them are psychological; some of them are organisational; some of them are actually family-related and highly emotionally laden,” says Dr Salvato.

Leadership coaching in family business does not fit neatly into any of those models.

Many of family business coaching’s particular characteristics become clear when compared to a modelled coach-client relationship. The relationship between the coach and the future leader is never formally initiated, as is the case with professional coaches, but in an informal way. In one case, a most trusted advisor, who used to go on holiday with the family, received a call from the father who asked the advisor to train his son who had come of age. Also, the distance between the advisor and the future leader is far closer than in a coach-client relationship. The most trusted advisor was a friend of the family, and he interacted with the next generation member frequently, through e-mails, phone calls, meetings and weekend outings. The power difference between a coach and the protégé need not be be big either – a most trusted advisor may be a senior manager, but a next generation member can often has power in the company through shares, a position in the Board of Directors, and other roles.

Case studies by Dr Salvato and his colleagues underline how different family businesses and their problems are from other companies and their issues. In most businesses, “if there are fights, you are fired. If you are not fired and don’t like what is happening, you leave the company.” Not so in family business. Dr Salvato: “You cannot fire your relatives – you can fire them, but not as relatives.” Because family businesses are different, studying them can contribute to existing theoretical frameworks.

On the basis of case studies of successful, unsuccessful, and yet indeterminate leadership successions in family firms, Dr Salvato and his fellow researchers have constructed a new, four-step model of how advisors can successfully prepare next generation family members for leadership. The four steps:

After his presentation, Dr Salvato answered questions from the audience. One audience member asked how remuneration is set, given the informal relation between the advisor and the family. Dr Salvato explained that the advisor already fulfils further roles in the family business, which are financially compensated. The coaching task is then embedded into that existing relationship and translates into additional pay, yet is never formalised in a separate contract.

A second question concerned the leadership development model: how do you move between steps? Dr Salvato emphasised that this is an issue he and his fellow researchers are still working on. Each situation is unique, and the transition between phases is tricky. Phases one and two are usually performed concurrently. They are started through separate interviews with family members over informal dinners. Thereafter, a contract is signed, and the third phase starts. The transition to the last phase depends upon the situation. In the majority of instances, the advisor plays a definitive role; he needs to indicate the next generation member is ready to become the leader and that it’s time to formalise this leadership.