“What happens to old family money?” asked Professor Michael Carney of Concordia University. “The value of money changing hands from generation to generation is quite significant. A figure from CIBC World Markets is 32 trillion dollars in the next five years or so.” 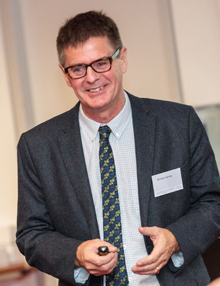 Professor Carney considers this wealth “dead money” – to borrow a term from the Bank of Canada’s governor Mark Carney – it is money that’s not used. “How does this money become dead?” According to the literature, money can die in the hands of successors, who underperform founders and are less innovative. Other explanations are that capital is progressively divided if it shared among more people, transferred to people who consume it, or to agents.

“The bigger question is, ‘how can intergenerational wealth strategies keep the money alive, or to what extent do they push it into the mattress?’” Taking ‘dynastic intent’ in terms of providing for children as his starting point, Professor Carney arrived at law, as “law governs the availability of financial instruments that are being used to transfer wealth from one to another, and they differ around the world,” for law is connected to politics and traditional customs. Another factor is surrogates – agents who direct the money left to descendants in trusts.

Comparative study of succession and surrogacy

On the basis of his notes, Professor Carney aimed at a comparative institutional analysis of succession and surrogacy. After a brief overview of existing literature on law and finance, he argued that inheritance law is understudied and highly variable across jurisdictions. While billionaires are said to be less innovative and more entrenched, the professor chose to focus on the legal basis of that behaviour. What happens to family money depends on four factors:

Those factors vary per jurisdiction, argued Professor Carney. For example, if you have a million dollars in Hong Kong you have the right to disinherit your spouse and children and leave a million to your dog, so to speak, while in Norway you could only give 300,000 dollars to whomever you want.

The professor presented a graph displaying the lifespans of family businesses, and noted: “The present strategy in family business is to study long-lived firms.” But the focus should shift as “we’re not studying what really happens, because most of them die quite early.” In Professor Carney’s view, the external institutional environment determines what happens to family business, not individual strategic choices. Due to external factors family firms persist unchanged in some countries, die quickly in others, “revitalise” – divide up and return differently – in Asia, or transform in yet other contexts through a separation of ownership and control.

Professor Carney first presented the case of German vineyards, which exist for nine generations on average. Small in size and number of employees, they started in the sixteenth century and they’re still in the family today. They owe their longevity to a feudal right to inherit an undivided farm, which is still in effect. Still, while clearly showing the effect of institutions upon the longevity of farms, “it doesn’t explain modern day family firms,” according to Professor Carney. “What we’re interested in is different kind of assets – financial capital – and that’s inheritable and divisible in a way that land isn’t.” Also, feudal rights don’t say anything about intangible assets, such as the inheritability of reputation.

The German Mittelstand is a social class whose family firms are considered legitimate and survive about three generations. Despite of post-war predictions of the demise of the Mittelstand, most family firms have survived, as they were taken over by women or sold to other families or employees. Professor Carney explained their persistence: “German law has limited testamentary freedom; you have a certain right to bequeath, but the first rule is that the family has to be protected, and there are quite strong stipulations about unnatural testaments that give money to people outside the family.” Also, Germany saw a late abolition of primogeniture in wealth provision, and the inheritance tax is relatively low. In 2009, tax became almost zero, if the family promised to keep factories open and preserve jobs for at least five years.

By contrast, there are but few middle sized firms in France. This situation dates back to the French Revolution, according to Professor Carney. Entailing was against the liberties of the people who didn't succeed – against equality. Napoleon codified the Revolution’s ideals in the French civil code. It divides wealth by law – the proportion that can be bequeathed freely is very small; the obligatory portion given to ascendants, the spouse and the reserve are large. The civil code consolidates wealth by right – only politically connected wealthy families can survive, creating oligarchies. In countries with this kind of code, there is less external finance and slow firm growth. Due to the civil code, today’s France knows limited testamentary freedom, is characterised by intestacy law that is very much about equal division, and has an inheritance tax that is extremely progressive. The distribution of French firms shows a “missing middle” in between the 40 large firms that have been at the top for a long time and the numerous small family firms at the bottom.

Quoting fellow researchers, Professor Carney emphasised that in Hong Kong, following succession, publicly listed family firms lose on average 50 to 60 per cent of their market value in five years. The value is never recovered afterwards. It is connected to the tendency of Chinese firms to divide up into smaller units with their own markets and products. The smaller units are unable to coordinate product research together. The breaking up of companies is encouraged by young inheritors, who press for the creation of separate firms, of which they will be the heads. The distribution of family firms in Hong Kong shows a rapid decline of the first and far smaller second generation. Firms disappear by the third generation. The essential tendency is a single generation of a family firm, as the law facilitates the dividing up of companies: according to Chinese customary law, the sons get mathematically equal portions; intestacy law is based on equal partial inheritance; inheritance tax is zero.

Firm transformation, trusts, and surrogacy in the US

In the US, family firms go public at some point. A family office is founded at the end of the first generation and within five years from that, half the family firms liquidate their property. “The office then manages a pile of capital, instead of an enterprise,” said Professor Carney. The participation in management falls faster than the dilution of ownership. By the end of the first generation, the family is controlled by professional managers. Much of the debate in this literature is about the tension between principles and agents – in which the agent is a professional manager. From an agency perspective, the BIC between the owner and the agent – the “surrogate” – is an interesting problem. US inheritance law institutionalises individual rights, with unlimited testamentary freedom. The common law allows for the establishments of trusts. Where the beneficiaries are people, the testator is limiting the freedoms of the next generation. The solution in the US is the rule against perpetuities, which stipulates that after the third generation, the founder’s rights are no longer salient and the estate can be divided. Thus, the classical trust in the US is a three-generation trust, the cycle of which lasts about a century. The US used to have a very progressive inheritance tax, discouraging the formation of trusts in the 1970s and 1980s. That state tax was abolished in 2010. By enabling trusts, the law allows for the double separation of ownership and control, either in the form of a highly specified estate plan or in the appointment of trustee, who can sell, buy or encumber property. The family members have the rights of equity – they benefit from the trust. Once legally constituted, the surrogates become agents in their own right. Whether they keep capital alive is unclear, as there is a lack of transparency. President Obama is pushing for new laws, intent on uncovering the activities of surrogates and the location of offshore accounts in order to render them open to taxation.

Through the cases of Germany, France, Hong Kong and the US, Professor Carney’s comparative institutional analysis of family firm longevity suggests there are very different patterns of succession and surrogacy which can be ascribed to differences in law.