The next generation takes the reins of family business 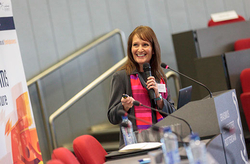 The launch of the Centre on Friday, 30 November at Rotterdam School of Management, Erasmus University (RSM) included an academic symposium and guest speakers from family businesses and governance bodies. Family businesses have the strength of longevity, the audience learned, because business families believe they are part of something bigger than their individual success.

The new research centre, under the leadership of Dr Vanessa Strike, will promote the development and long-term viability of family businesses. The launch event proved that there are questions that need to be answered, and there is already evidence that the Erasmus Centre for Family Business is serving a very real need.

In the Netherlands, Dutch family businesses account for over 50% of all businesses and almost 50% of employees. Combined with their economic impact they have a commitment to their communities and, as Dr Isabelle Breton Miller mentioned in the panel discussion, “they tend to manage for the long term.”

The theme of the speakers and networking event was leadership of the next generation, an issue that puts pressure on both emotional and business aspects of family ownership. While only 7% of the next generation say they want to lead the family firm, 23% have thought about it and it is believed that providing the latter group with the tools to understand and discuss their thoughts will enable them to make better informed choices. Dr Strike reported how students on her Master’s course were already reporting that their discussions around succession were being aided by such work.

The afternoon’s three speakers presented the issue of next generation leadership from three different generational perspectives, relating the challenges they had faced and the undoubted passion for what they do. In the open discussion Professor Pursey Heugens of RSM spoke of ‘goosebumps’ whilst listening to the speakers.

Alice Huisman spoke of taking over yacht builders Royal Huisman, being the fourth generation to run the company, and how they prize the quality of their work before commercial success; Sebastiaan Sanders, 32, recently took over furniture maker Leolux, continuing his father’s vision with his father Jeroen still playing an advisory role. Finally, fresh from a meeting with Prime Minister Mark Rutte, keynote speaker Bernard Wientjes, President of the Confederation of Netherlands Industry and Employers (VNO-NCW) spoke movingly of having to sell his company Ucosan after his children chose careers away from the family firm.

The common theme from the speakers was the need for clear communication about what role the family was to play in running the company. Many family members do not actively participate in the running of the company, but wish still to have ownership, both financial and emotional, and require constant updates. It is not necessary to set out a family charter, believes Sebastiaan Sanders, as long as the family and company are aligned to a common vision. The other important factor was the role of external advisors, commonly as an advisory board, to offer independent guidance on the direction of the company. As one family business owner has said: “We need them to protect us from ourselves.”

The speakers were joined for a panel discussion by Professor Michael Carney from Concordia University and Dr Isabelle Lebreton Miller from HEC, Montréal. Prof. Carney stated that in Asia there was hardly any appetite for the next generation of business families to take over from their parents, while in Europe the question was more open. According to Pieter Pelt, Director of the Stiho Group, it is up to the next generation to show competence and willingness to take over.

The role of family business and its perceived value to the economy is clearly changing. “When I was studying business and I was talking about leading the family firm, everybody was laughing saying these were obsolete, that you have to be on the stock market,” said Mr Pelt. 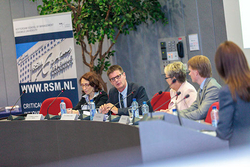 Now, it could be said the opposite is true. “All eyes are pointed to family business to help grow our way out of the economic crisis,” said Pauline van der Meer Mohr, President of Erasmus University Rotterdam. As companies look increasingly to corporate social responsibility and sustainability, creating what some call the ‘values-based economy’, it seems that in addition to an economic contribution, family businesses have retained qualities of longevity and sustainability that other companies also prize. “Family businesses are very much about trust and relationships,” commented Dr Strike. “They are much more about relational contracts versus transactional contracts.” Henk ten Hoorn, a consultant for the Hay Group, echoed this difference of perspective: “Family business members feel they are just guiding the company for a short time. The main task is to hand it over to the next generation. It’s a very different atmosphere to companies that seek short-term profit.”

The networking event displayed the warmth, commitment and promise of business families, with Peachtree bellinis served courtesy of Bob de Kuyper, Chair of the Centre’s Advisory Board, whose company de Kuyper was founded in 1695.

“All questions that were asked in the meeting we are really dealing with” said Thomas van Meel of Pieter van Meel Game and Poultry Wholesalers, who voiced a common opinion amongst the 130 academics, business families and students attending. It was clear from these comments that the Erasmus Centre for Family Business is serving a very real need, one underlined by the closing comments of Dr Strike: “Two months ago, a young bachelor’s student was sent to me,” she said. “He came from a family business and had just lost his father three weeks earlier from cancer. He was 21 years old and he was now charged with assuming the role of CEO of the family firm.  He asked what he should do. I told him to take the time to grieve. He said ‘but the company is also grieving’. That is the mark of a family business, and a young man who will take on the leadership challenge.”