In previous decades, the perception of Japan’s employment practices has been strongly intertwined with its economic fortunes. From the 1970s, Japan’s employment practices came to be seen as one of the cornerstones of its economic success. However, this perception changed, albeit with a substantial delay, when the economy proved incapable of returning to its former path of growth after the ‘bubble’ burst at the end of the 1980s. Like so many of its economic institutions, the employment practices became the subject of substantial criticism in a debate on the revitalisation of Japan’s economy. This study takes its position within this debate by discussing the likelihood, character, and economic consequences of change. Environmental changes, like the ageing of the population and the substantial decrease in economic growth, require Japanese firms to adapt their human resource management. However, the embeddedness of national practices limits the scope of firms to make these adjustments; and change is determined by the dialectics between their strategies and existing practices. The firm, as an institution, thus experiences the impact of both the embedded employment practices and the economic impact of environmental changes. Accordingly, it is at the centre of this study. Theories of the firm are used to discuss the contribution of employment practices on efficiency, capabilities, and competitive strength. Case-studies from four different industries – automobile, electronics, construction, and retailing – describe the adaptations made by individual firms. Subsequently, these findings constitute the basis for a discussion of industry-specific employment practices and provide an answer to whether developments such as the rise in performance-based pay and labour mobility have altered the logic of Japanese employment practices. 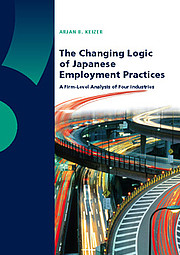