Dissecting Drayage: An Examination of Structure, Information, and Control in Drayage Operations Defended on Friday, 12 February 2010

The term dray dates back to the 14th century when it was used commonly to describe a type of very sturdy sideless cart . In the 1700s the word drayage came into use meaning “to transport by a sideless cart”. Today, drayage commonly refers to the transport of containerized cargo to and from port or rail terminals and inland locations. With the phenomenal growth of containerized freight since the container’s introduction in 1956, the drayage industry has also experienced significant growth. In fact, according to the Bureau for Transportation Statistics, the world saw total maritime container traffic grow to approximately 417 million twenty foot equivalent units (TEUs) in 2006.

Unfortunately, the drayage portion of a door-to-door container move tends to be the most costly part of the move. There are a variety of reasons for this disproportionate assignment of costs, including a great deal of uncertainty at the interface of modes. For example, trucks moving containers to and from a port terminal are often uncertain as to how long it will take them to pick up a designated container coming from a ship, from the terminal stack, or from customs. This uncertainty leads to much difficulty and inefficiency in planning a profitable routing for multiple containers in one day. We study this problem from three perspectives using both empirical and theoretical techniques. 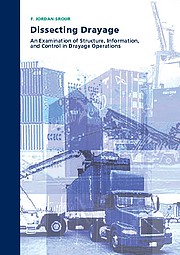