Network Horizon and the Dynamics of Network Positions: A Multi-Method Multi-Level Longitudinal Study of Interfirm Networks Defended on Thursday, 31 May 2007

Why does the network position of a firm change? Which firm, partner firm, and network factors accelerate or slow down this change process? This is the central theme of this dissertation. The causal mechanisms behind the benefits of network positions have received considerable attention in academic research on interfirm networks. However, in most cases this research assumes a more or less static network. In today’s world of advanced communications, interfirm networks are not static but highly dynamic where firms pursue beneficial network positions. A particular beneficial position is the bridging position that puts the bridging firm in-between its partner firms. Taking the bridging position as point of departure, this study investigates the strengthening, weakening and longevity of this position. A rigorous triangulation method has been used combining network experiments, simulation, and field data analysis with formal tools that have been specifically designed – as part of this study – to study interfirm networks (the Business Network Engine and LINKS). The concept of network horizon is being introduced to define the degree of information which a firm holds on the structure of its interfirm network at a given point in time. The size of a firm's network horizon is shown to be a critical determinant of the firm's ability to strengthen and keep its bridging position. This does not mean that a firm should always try to expand its network horizon as the study indicates a passing point: expanding the network horizon beyond this point gives rapidly diminishing returns. Interfirm differences in their network horizons, i.e. network horizon heterogeneity, is found to be an important predictor of the intensity of competition for network positions. Resource similarity between partner firms weakens the bridging position; and resource dependence strengthens the bridging position. In summary, it is being proposed that the most valuable network positions are ones that will not last long. This study has provided important tools and methods for rigorous future research that will be highly relevant for managers to develop successful network strategies to win the best position in a networked world. 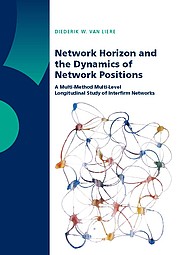