Robert van der Meer was born on December 20th 1970 in Harderwijk, the Netherlands. In 1984, he moved to Mclean Virginia in the USA and finished the Mclean High School in three years. Back in the Netherlands at the age of 16, he continued his education at the International School in Hilversum, which he finished with a Bilingual International Baccalaureate. In 1990 he started his academic life and studied Business-econometrics at Erasmus University Rotterdam. In the first half of 1996 he received his Master?s degree after writing a Master?s thesis on Multi-component maintenance optimization models. At the same university he took the opportunity to continue his academic life with a Ph.D. project within the group of Logistic Management. His research on the control of vehiclebased internal transport systems has resulted in a number of publications in journals and books and an International Transport & Logistics best-paper award.

Operational Control of Internal Transport considers the control of guided vehicles in vehicle-based internal transport systems found in facilities such as warehouses, production plants, distribution centers and transshipment terminals. The author's interest of research having direct use for practice has resulted in a combination of theoretical and practical research in vehicle-based internal transport systems. An overview is given of the related literature and results are presented that show how different vehicle dispatching rules behave in different environments. 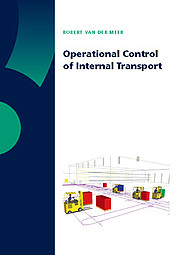