Cyclic Railway Timetable Optimization describes mathematical models and solution methods for constructing high quality cyclic railway timetables. In a cyclic timetable, a train for a certain destination leaves a certain station at the same time every cycle time, say every half an hour, every hour, or every two hours. Cyclic timetables are widely used in European railways. They offer a clear and transparant product to the railway customers, who only need to memorize the minutes of the hour at which their regular trains depart. Because of the important role of timetable planning for railway operators and railway infrastructure managers, models and methods for optimizing cyclic railway timetables provide a valuable tool for these organizations. The thesis presents a mathematical model for optimizing cyclic railway timetables, and studies the theoretical aspects behind the model. The investigated aspects include cyclic sequencing, periodic tensions, cycles in graphs, cycle bases of graphs, algorithms for constructing cycle bases, and cutting planes for the model. The developed theoretical ideas are tested on some real-life cyclic railway timetabling instances. The thesis further develops several extensions of the basic model.

Improving the flexibility and profitability of ICT-enabled business networks: an assessment method and tool 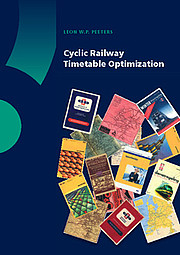