Passenger railway operators meticulously plan how to use the rolling stock and the crew in order to operate the published timetable. However, unexpected events such as infrastructure malfunctions, or weather conditions disturb the operation every day. As a consequence, significant changes, such as cancellation of trains, to the timetable must be made. If these timetable changes make the planned rolling stock and crew schedule infeasible, one speaks of a disruption. It is very important that these schedules are fixed such that no additional cancellations of trains are necessary. Nowadays this rescheduling is still done manually by the dispatchers in the control centers.

In this thesis we use Operations Research techniques to develop solution approaches for crew rescheduling during disruptions. This enables us to solve the basic operational crew rescheduling problem in a short amount of computation time. Moreover, we studied an extension to the basic problem where the departure times of some trains may be delayed by some minutes. We show that this can lead to significantly better solutions for some real-life instances. Furthermore, we presented two new quasi robust optimization approaches that deal with the uncertainty in the length of the disruption. The computational study reveals that one of these approaches outperforms a naive approach in many cases. We believe that the methods developed in this thesis provided the foundation for a decision support system for railway crew rescheduling. 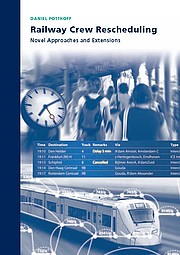