The Dark Side of Leadership: Exploring the Psychology of Leader Self-serving Behavior Defended on Thursday, 3 September 2009

Leaders often have considerable control over the distribution of scarce resources within their organizations or groups. In the quintessentially interdependent organizational context these resources are typically needed to reach collective goals, and yet some leaders choose to enrich themselves at the expense of the group. In academic circles as well as in the forum of public opinion, leader self-serving behaviors have been proposed to be particularly destructive, because they carry the specter of negative consequences for the organization at large, as well as for individual followers’ motivation and performance. In contrast, leader group-serving behaviors have consistently been depicted as a positive force, linked to increased leader effectiveness. Despite the considerable dysfunctional downstream consequences associated with leader self-serving behaviors, our understanding of when and why leaders choose to serve their own interests or to benefit their groups has been limited. This dissertation aimed to uncover factors that influence leader self versus group-serving behaviors by pointing to the value of (1) a self-concept-based analysis, as well as (2) a power-based analysis of leader behaviors.
In a series of experimental and field studies, across four empirical chapters (1) I have outlined how self-definition processes intimately tied to the leader role, as well as power-related processes influence leaders’ framing of allocation situations and their subsequent behaviors, and (2) I have identified potential ways to mitigate some of the negative effects associated with elevated leader power. First, we found that self-definition as a leader and power influence the type of information used by leaders in resource allocation contexts. Contingent on the content of this information, more or less self-serving behaviors ensued. Importantly, power did not necessarily lead to increased leader self-servingness. Second, we identified systemic procedural justice, accountability, and perspective-taking as potential mitigators of some of the more negative tendencies associated with elevated leader power that could result in relatively self-serving leader behaviors. 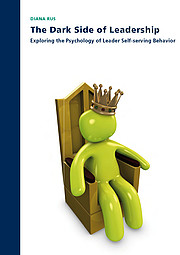