Morality in Interactions: On the Display of Moral Behavior by Leaders and Employees Defended on Thursday, 6 December 2012

Recent research has tried to understand moral behavior in the workplace mainly from an intra-personal perspective, blaming ethical failures on the person’s moral character, moral development or moral identity, or on isolated aspects of the situation. In doing so, little attention has been paid to the interplay between the person and the interpersonal context in which this behavior takes place. Thus, an important angle for investigating the question why good people do bad things has yet remained unexplored.

In this thesis I present four chapters that illustrate this interpersonal influence in the context of ethical behavior within organizations – I discuss how leaders and followers influence each other’s moral behavior, how the organization’s moral norms influence employees moral decisions especially when they identify strongly with the organization, how follower moral awareness influences the effects of ethical leadership on the employee’s deviant behavior, and how demographic differences between leaders and followers influences the effect moral leadership has on employee performance.

Together these chapters aim to increase understanding of the importance of factors in the interpersonal for moral decision making by individuals. 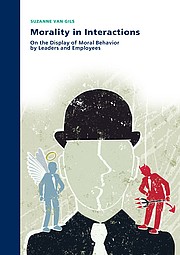