Passengers, Crowding and Complexity was written as part of the Complexity in Public Transport (ComPuTr) project funded by the Netherlands Organisation for Scientific Research (NWO). This thesis studies in three parts how microscopic data can be used in models that have the potential to improve utilization, while preventing excess crowding.

In the first part, the emergence of crowding caused by interactions between the behavior of passengers and the public transport operators who plan the vehicle capacities is modeled. Using simulations the impact of the information disclosed to the passengers by public transport operators on the utilization and passenger satisfaction is analyzed. A quasi-experiment with a large group of students in a similar setting finds that four types of behavior can be observed.

In the third and final part it is considered how individual decision strategies can be developed in situations where there exists uncertainty about the availability and quality of travel options. We investigate how the best strategy for a specific type of objective can be computed. Finally, we analyze which strategies are worthwhile to consider for a very broad set of objectives. 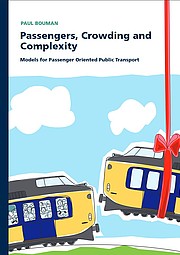