Dynamics and Competition in Charitable Giving Defended on Thursday, 22 January 2009

Nowadays potential donors receive many direct mailings from many different charities, all soliciting their donations. As charities depend for a large part on their revenues from direct mail it is important to uncover the precise effects of charitable direct mailings on donating behavior. Existing studies on donating behavior generally focus on a single decision context, that is, a single donation to a single charitable cause. In reality, however, people receive many donation requests, and the responses to these requests may not be independent.

In this thesis we study the dynamic and competitive effects of charitable direct mailings on donating behavior. We present two direct mailing response models, with the first focusing primarily on the competitive dimension, and the second focusing mainly on the dynamic dimension. To calibrate these models we have access to a unique dataset consisting of the databases of multiple charity organizations, providing us with detailed information on direct mailings and donations at the individual donor’s level. In addition, we conducted a direct mailing field experiment in cooperation with various charities. In the analysis of this experiment, we zoom in on the direct mailing effects on actual behavior and on the underlying motivational process. We establish that substantial dynamic and competitive effects exist and that the single decision context can thus not be justified for properly analyzing direct mailing response behavior. We also provide some practical implications of these results for charities. One of our surprising results is that – contrary to the public opinion – charities would have to send even more mailings in order to increase their revenues. 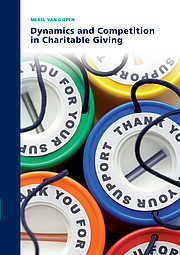