The Rise of Regionalism: Core Company Strategies Under The Second Wave of Integration Defended on Thursday, 3 June 2004

Regionalism has eclipsed the multilateral system as the 'fast track' for international economic restructuring. Within that framework, the Single European Market (SEM) and North American Free Trade Agreement (NAFTA) have emerged as the bi-polar core of the global economic system. Both agreements employ complex economic models as the basis for projected growth and increased competitive advantage and took a relatively simplistic view of 'the firm'. Partly as a result, ten years into the 'Second Wave' of regionalism there are few uncontested conclusions as to its outcomes or significance.Regional integration has largely been facilitated through the lobby activity of Western 'core companies': large, powerful firms that lead economic restructuring and operate with one foot in the political process. For Western core companies, regionalism has become the institutional framework of choice within which the struggle for the preservation and consolidation of their core positions is played out. Taking their spatial organization of production in 1990 as a baseline, this study is the first to systematically unravel the traditional macro-aggregated understanding of integration outcomes. The evidence shows that, despite the persistence of 'globalization' ideology, regionalism has fueled a diverse pattern of strategic migrations among core companies, particularly since 1995. The outcome is one of growing polarization between North American and European core companies, and consequently within an increasingly dyadic world economy. 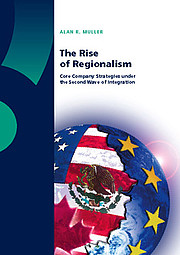