Working Across Borders: Multinational Enterprises and the Internationalization of Employment Defended on Friday, 28 November 2003

Multinational enterprises (MNEs) are often held responsible for the ‘relocation of production’ and ‘exporting jobs’ to, often low-wage, countries at the expense of domestic jobs. Additionally, host country governments – in particular in developing countries - often perceive international production by MNEs as the panacea for generating employment and economic growth. What is the spatial organization of production and employment of MNEs? What are the employment effects of changes in the geography of international strategy? Have MNEs increasingly integrated production across borders with a regional division of labor and, what are the employment effects?This thesis demonstrates that the geography of a MNE’s internationalization strategy as well as the stage of its internationalization process influences employment in both home and host countries. Competition among workers within macro regions in industrialized countries (e.g. the EU) and among low wage countries or regions is often greater than between high and low wage countries. The employment effects of internationalizing firms are often intertwined with processes of regional integration as well as with the herding and strategic behavior of MNEs. 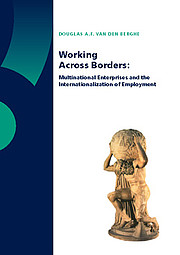