Over the last few years, the world has been shocked by a new wave of political conflict, including the events of the Arab Spring and the conflict in Ukraine. This dissertation evaluates the causes of political conflict and its consequences for investments by multinational enterprises (MNEs). The studies that are part of this thesis aim to improve our understanding of the relationships between political conflict, investment and ultimately human prosperity. These three concepts are interdisciplinary in nature and the different chapters included in this thesis reflect this. By combining conceptual frameworks and methodologies from economics and business research, they shed light on the increasing levels of political conflict and the reaction of firms to this development.

In the first part of this thesis, the causes of non-violent political conflict are examined. The findings demonstrate that a decrease in subjective well-being (i.e. happiness) can motivate citizens to engage in acts of civil resistance. In the second part, the consequences of armed political conflict for Foreign Direct Investment (FDI) are examined. The effect of political violence on greenfield FDI is heterogeneous across types of violence, sectors and firms, falsifying the claim that all FDI flows are negatively affected by political violence. In addition, the results indicate that similar to international conflict, internal wars can disturb existing relationships between the MNEs’ home and host country 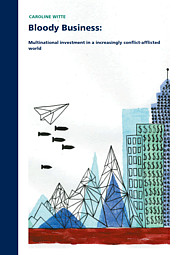