A license to mine? Community organizing against multinational corporations Defended on Friday, 18 November 2016

What does it mean when a corporation claims to have a ‘license to operate’ in a local community? How does a member of an indigenous tribe make it to London to protest against a multinational mining company? How do managers perceive and speak about protest against their company and how does this discourse matter for social movement repression? First, I argue, based on a literature review, that responsiveness to local community needs has become an important factor influencing the ability of multinational enterprises to successfully internationalize their operations. Then, I explore the practitioner concept of the license to operate and develop this into a theoretical framework. Based on a case study of an anti-mining movement, that grew from the initial local community resistance in a remote Indian mountain range into a translocal movement, I try to answer the remaining questions empirically. To shed light on the organizing processes in anti-corporate movements, my co-authors and I trace the journey of a young man who for a short time became one of the leading figures in the anti-mining movement but later changed sides to support the company. We also highlight the importance of national advocacy networks for successful movement building across borders. Finally, I analyze the managerial discourse about the anti-mining resistance and link it to the repression of social movement actors by the police and other stakeholders. Overall, this dissertation builds on and advances the growing literature on anti-corporate social movements. 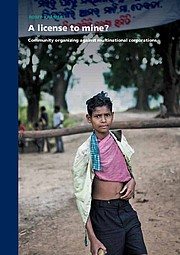