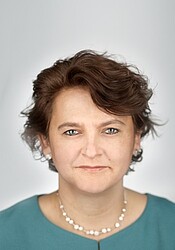 Prof. Tine De Moor (°Ghent, 1975) holds a PhD in History from Ghent University (2003) and a postgraduate in Environmental Sciences at the University of Antwerp (1999). In December 2012, she was appointed professor of Institutions for Collective Action in historical perspective at the Faculty of Humanities, Department of History & Art History at Utrecht University, a position she held until her transfer to RSM. At her previous position, Tine De Moor conducted research into the creation, functioning and evolution of institutions for collective action, past and present, from the early modern period in Europe until today. Institutions for collective action are forms of organizations formed from below, by the immediate stakeholders, with the aim of working together to pursue both personal (material) and societal interests. Issues that have been studied by her research team are the many energy and care cooperatives that have developed over the past decennia, the initiatives of citizens involves in short chain food supply, the formation of platform cooperatives and the renewal of the mutual as a form of insurance for the self-employed. Besides this she has been researching labour market participation and household formation patterns over the past millennium, and she has been actively involved in developing innovative research methods, through, for example, several Citizen Science Projects. She has been president of the International Association for the Study of the Commons and has set-up the peer-reviewed International Journal of the Commons, and she acts as expert in several national and international boards. In the past 10 years, she received several large research grants, such as an ERC Starting Grant and an NWO-VIDI.

Gigs of their own: Are worker-owned and worker-governed platforms viable?

Historical analysis of the development of fishing collectivities as ICAs (Europe)

Across Europe, new bottom-up and self-governing institutions for the provisioning of energy, food, care and many other goods and services are currently increasingly being set up by citizens. Citizens hereby govern and use resources collectively according to the rules they decide upon as a group. The institutional design of these modern-day forms of citizen collectivities has many similarities with guilds, commons, cooperatives, and other institutions that have been developed in Europe’s history. The PhD-student will studying such historical forms of institutions for collective action, together with other team members of the Institutions for Collective Action research team, several of them also working for the UNICA-project. UNICA stands for “Building a UNified theory for the development and resilience of Institutions for Collective Action for Europe in the past millennium” and aims at building a unified theory that both explains the factors behind the development and spread of such “institutions for collective action” (ICAs) across Europe over the past millennium. In the project we will focus on the claim that these ICAs are more resilient organisations than top-down, share-holder types of organisations. This will be done by:

The PhD-position fits under the 3rd part of the project and will focus on the micro-level, and in particular on the functioning of fishing collectivities, from the various forms of guilds in the early modern period to cooperatives formed by fishermen today. The focus will be on the internal functioning of such institutions, and how this changes over time, in relation to their size and heterogeneity. However, the relevance of the study of collectivities in fisheries goes far beyond a contribution to explaining what makes ICAs resilient. It also connects to highly relevant societal debates about -amongst others- the current challenges of the fishing industry (both legal, as in the fishing quota, and in social-economic sense), sustainability, and globalisation. Fisheries make critical contributions to the employment of approx. 40 million people employment across the globe, but also to food security and nutrition, with fish constituting an important source of nutrients for the poor and often being the cheapest form of animal protein. Nevertheless, fishing grounds are under continuous stress and their overexploitation may have substantial long-term effects on the world’s population. Understanding good governance, whereby collective action has always been an essential element, is thus vital, both on a local and global level. The project will be executed within the Institutions for Collective Action Team at the Business-Society-Management department of RSM, where sustainability is central to all research and cooperation with other disciplines is key. The researchers of the ICA-team (see www.collective-action/team) work in a broad range of sectors in various countries, have been trained in a variety of disciplines, and apply mixed-methods approaches in their work. Besides this, all members also contribute to collective endeavours to translate their academic research to and share it with the general public, through e.g. the Extreme Citizen Science Project Collectievekracht.eu.

Further information about the project can be found at: http://www.collective-action.info/unica