Strict regulations that aim to limit executive compensation will be counterproductive – if not destructive – to economic growth, warned Professor David Yermack at this year’s Erasmus Management Lecture held at Erasmus University on Wednesday 12 June.

Despite public anger at the height of executive pay, politics had better not get involved, argued Professor David Yermack, who is Albert Fingerhut Professor of Finance and Business Transformation at NYU Stern. He was speaking in front of an audience of finance and accounting researchers and professionals at the Erasmus Management Lecture 2013, organised by ERIM.

A recent amendment to the Swiss constitution has made shareholder votes on firm compensation schemes mandatory and a number of common bonuses illegal. Politicians in other countries have pledged to do the same. According to the Harvard-trained economist, such steps “are not only counterproductive, but flat-out unworkable.”

At ERIM’s invitation, Professor Yermack delivered this year’s Erasmus Management Lecture, which was followed by a panel discussion. “The compensation of top executives is a topic that has attracted much attention in recent years – from the media, policy makers, and the public in general,” said <link people marno-verbeek>Professor Marno Verbeek, ERIM’s Scientific Director. “It’s ERIM’s goal to highlight research in this area so that the debate can take place on the basis of academic arguments and evidence, rather than emotions.”

The argument against strict say-on-pay legislation 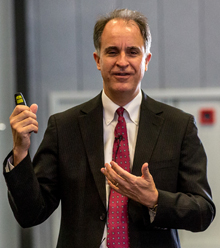 Say-on-pay legislation has humble beginnings. First introduced in the UK in 2002, it made a simple, annual vote by shareholders on the overall compensation strategy of the firm and a certain amount of disclosure mandatory. “At the time, I thought this was actually a very good idea,” Professor Yermack said. “The belief was that companies would implicitly do the right thing if they lost the vote. There was no set of mechanical procedures that would kick in. Most importantly, the managers could continue working and being paid. This would not immediately disrupt contracts that had already been agreed.”

The ensuing shareholder votes turned out to be benign. “People were surprised that despite of a lot of public anger about executive pay very few cases emerged of shareholders failing to ratify individual companies’ packages, usually by overwhelming margins – 90 per cent or more,” according to the American professor. ”I think the lesson learned was that a few outliers seemed to drive the anger, but if you looked at the median company, or 90-95 per cent of the companies, shareholders were happy about how things were going.”

Still, public anger at executive pay is pushing for more, stricter say-on-pay regulation. A bad idea, according to Professor Yermack. ”The basic problem with too much shareholder voting is that the consequences if you lose need to be spelled out carefully,” he said. In many cases, they are not. So it happened that Citigroup CEO Vikram Pandit was ousted last year. A negative vote on the firms’ overall compensation scheme was interpreted as a vote against him personally, while in fact he had been re-elected to the Board on the same day.

More importantly, “shareholder voting is a cumbersome instrument in that it takes a great deal of time to organise, schedule and prepare one of these votes – often three months as a minimum. Contracts are signed much quicker than that,” the professor argued. ”You can’t have managers sign contracts, wait three or four months, and then see if the contract is real.” In that case, Professor Yermack predicts legislation will backfire and executive pay will rise rather than decline. As managers will view their income as somewhat uncertain, they will demand a higher base salary, including a risk premium. ”The ironic outcome of all this is that managers will end up being paid more.”

Politicians had best not regulate executive compensation at all, according to the American economist. In his view, market forces alone will optimise the compensation packages of executives. Through their work, the best executives provide many economic benefits, which are overlooked by the public. If you sack the highest-paid CEOs on the basis of social values, less productive managers will take their places. As a consequence, ”you’ll end up compromising other important social goals, like inexpensive products, high retirement savings, and safe bonds,” said Professor Yermack. ”These are all things we want, but we seem to want them without the managers being rewarded for delivering them to the market.”

Not all academics agree with Professor Yermack’s liberal view of executive pay, as became clear during the panel discussion that followed the lecture. The discussion was moderated by Sandra Phlippen, editor-in-chief of the leading Dutch economy journal Economic Statistic Messages (Economische Statistische Berichten).

Associate Professor Zacharias Sautner (UvA) and <link people frank-hartmann>Professor Frank Hartmann (RSM) proposed to take the human factor more seriously. High executive bonuses may demotivate employees according to Dr Sautner, and from the European perspective, they are important stakeholders too. Professor Hartmann pleaded for trying to understand public anger over executive pay. We should respond to it by using sound theories to inform policy, he said.

As for the Netherlands, mandatory shareholder votes on compensation policies are working well, the audience learned from Rients Abma, Executive Director of the Dutch institutional investors’ platform Eumedion. The Netherlands has adopted the model favoured by Professor Yermack: shareholder votes on firms’ compensation policies are mandatory, but without strict legal consequences. It fits seamlessly in the Dutch polder model: dialogue is sought in the months before shareholders cast their vote, causing only few votes to fail since the introduction of binding say-on-pay in 2004. The EU is now looking to the Netherlands as a model for this kind of legislation. 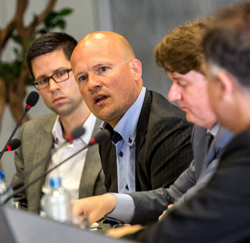 To conclude, there is room for non-monetary management compensation in addition to financial remuneration, replied the European academics in response to a question from the audience. Prestige and status matter in firms, argued Dr Sautner. People are even willing to be paid less if the firm is a big brand. In addition, we shouldn’t forget that too much focus on money can crowd out intrinsic motivation, he warned. Perhaps the most important form of remuneration is also intrinsic. The ultimate measure of performance may be happiness, said Professor Hartmann.