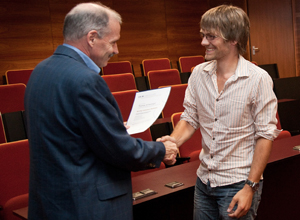 The first Erasmus Management Lecture featured distinguished Professor in marketing, Roland T. Rust. On May 31 and June 1, 2011, he gave four lectures and led discussions on “how the provision of service can be made into a profitable part of business.”

“If you want to provide better service, that is going to involve more labour and therefore more cost - how to manage that is an on-going research topic,” said Professor Rust.

The Professor gave in-depth commentary on a selection of his award-winning papers providing what he described as “a pretty good overview of my research for the last 15 to 20 years.” His comments were directed towards process and content.

Professor Rust encouraged the participants to critically analyse his work and actively question how it may be “improved,” “attacked,” or updated. This led to complex discussion between the Professor and the intimate gathering of doctoral candidates hailing from a range of disciplines including neuroscience, economics and marketing.

Thomas Eichentopf, a candidate in ERIM’s Open PhD Project in marketing, described the atmosphere as “intense.”

“It is kind of an intense atmosphere, so you learn better than in your usual PhD classes,” he said.

Professor Rust also wove practical career advice and the latest developments and hot forecasts in marketing through the lectures. This included a dedicated session on getting published. Professor Rust offered the benefit of his wealth of experience in submitting, reviewing and editing papers. This, and other solid career guidance was clearly well received.

Service is the subject of Professor Rust’s on-going work, and in his view, “the most interesting part of the economy and the fastest growing.” The Professor was utterly immersed in the subject as he talked about his earlier research and gave an energetic presentation on his current work.

“This paper goes against the grain….always the kind of paper I like to write” Professor Rust said, referring to his award-winning 1997 paper on customer satisfaction, productivity and profitability.

The mainstream view at the time of writing was: “if you improve productivity, everything gets better – there is no trade-off between productivity and customer satisfaction,” said Professor Rust. He explained that he and his co-authors were “reacting to mainstream quality literature…and saying it’s wrong.”  Instead, Rust and his co-authors were saying, “[t]his is probably not how it works for service. There is actually likely to be a trade-off between productivity and customer satisfaction for service.”

The Professor found that high productivity and high customer service equalled high profit, for companies that can be characterised as goods companies or mechanised service companies.

“Industries that picked high customer service or high productivity, were pure services,” he said. For the service sector “it looks a lot like you need to pick one,” said Professor Rust. “Whereas in goods, you need to do both.”

The Professor then presented his recent paper, “Optimising Service Productivity.” He reported that the Journal of Marketing recently conditionally accepted this paper.

Professor Rust discussed how to equate service productivity with cost reduction and gave examples of automated services that do have “a social cost”. He said that automated services, such as the telephone menu, can mean “decreased customer satisfaction.” Although he said that if the technology is good enough, “you can get away with it,” giving the internet as an example that seems to work for people.

The central thesis is therefore, “at a particular technical level, an optimal level of service productivity exists.”

“So, labour versus automation is a key service productivity decision,” said the Professor before discussing the theoretical framework, which may be paraphrased as follows;

The paper includes analytical and empirical models that show that the number of variables should have a predictable effect on productivity levels.

Professor Rust made it clear that this is work in progress and he eagerly led discussion on its future direction, inviting ideas, comments and criticism. When asked about other plans for the future, he hinted to work pertaining to evolutionary theory.

“It sounds crazy for a marketing person…. but I have produced papers that have been completely rejected by the field,” he said, unmoved.

Then after a brief pause he said, “I have some ideas. And they will move forward. And it will take years,” he smiled.